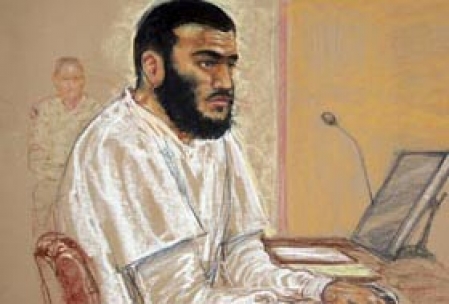 Omar Khadr has returned to Canada. Here are government and Liberal Party statements:

OTTAWA– Liberal Leader Bob Rae made the following statement today on the repatriation of Omar Khadr:

“Omar Khadr’s return to Canada is long overdue. Mr. Khadr, a Canadian citizen, was a child soldier. It is extremely unfortunate that it took the Conservative government this long to fulfil its responsibility to bring him back to Canada.

Now Mr. Khadr will serve the remainder of his sentence under the supervision of the Canadian correctional system, and we can ensure that he receives proper treatment and rehabilitation.”

This was done pursuant to a decision I made earlier this week.

He arrived at 07:40 ET aboard a U.S. Government aircraft travelling from Guantanamo Bay, Cuba.

He has been transferred from CFB Trenton to Millhaven maximum security prison at Bath, Ontario.

Omar Khadr is a known supporter of the Al-Qaeda terrorist network and a convicted terrorist.

He pleaded guilty to the murder of Sergeant First Class Christopher Speer, an American Army medic, who was mortally wounded in a firefight in Afghanistan on July 27, 2002 and died on August 6, 2002.

Omar Khadr also pleaded guilty to:
• Providing material support for terrorism;
• Attempted murder in violation of the law of war;
• Conspiracy and spying

This transfer occurs following a process initiated by the United States Government and determined in accordance with Canadian law.

The remainder of his prison sentence will be administered by the Correctional Service of Canada.

I am satisfied the Correctional Service of Canada can administer Omar Khadr’s sentence in a manner which recognizes the serious nature of the crimes that he has committed and ensure the safety of Canadians is protected during incarceration.

Any decisions related to his future will be determined by the independent Parole Board of Canada in accordance with Canadian law.

The government portrays Khadr as a convicted terrorist and an admitted murderer. The victim is cited as Christopher Speer. The statement suggests need for recognition of Khadr’s “serious” crimes and calls for incarceration to protect the public.

Two distinct tones in these statements. Each one finds blame and each one finds a victim. Which one do you think properly represents reality as it exists?