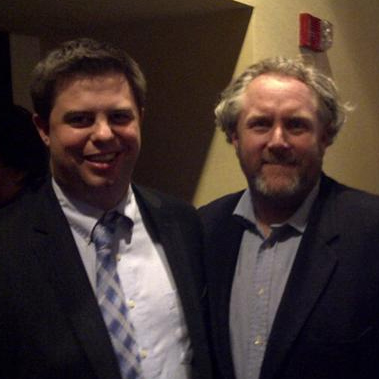 Andrew Breitbart has died. He was 43.

The news was a bit shocking when I saw it passively cross my twitter feed this morning via Brian Lilley. Twitter announcements of celebrity deaths are to be automatically taken with a dose of skepticism these days as celebrity news and rumour can spread quickly on the medium. Compounded with his young age and the fact that controversy around facts was one of Breitbart’s tactics, I thought this too was a hoax that had snagged the imaginations of the twitterers.

Unfortunately, this was not the case.

I met Breitbart at CPAC just a few weeks ago in Washington DC after he gave one of his characteristic barnburner speeches to gathered attendees in the ballroom of the Marriott Wardman Park hotel. He came right up to the blogger’s room after the speech. American conservative bloggers have highly revered the man, and the room buzzed as he worked his way through it. I wanted to make my own introduction, really just to say hello, and tell him of similar struggles in Canada to change the liberal media culture landscape. But I had to wait as he tore into a liberal bloggers who had misrepresented herself as a Washington Times columnist in order to get an interview. After the fracas, he was pleasant enough to make time for a quick exchange.

Later at the conference, I was sitting in a restaurant with a few friends taking a break from the activities. Governor Scott Walker was scheduled to speak later that evening and the Occupy/Union folks were planning on giving him a noisy reception. As the left-wing mob advanced on the hotel, we had a view from our table.

And then a booming voice.

He was taking on the mob. In fact, about 100m and through the windows of the hotel, I could hear the general rabble of the crowd being shouted down by one man. It was Breitbart, of course. He was telling the Occupiers to stop the sexual assaults that have been reported at Occupy camps around the US.

If we compare Occupy and the Tea Party, the Tea Party is generally more polite and law abiding than the occupy protesters. But what the Tea Party lacked in fire and bad behaviour, Breitbart tried to close the gap.

He was the boor of the right and we were glad to have him.

The right has often been cowed by mainstream observers into thinking it is their behaviour that is anti-social; many conservatives think they ought to apologize before speaking their views. The man in the tricorner hat, waving a Gadsden flag and a mispelled sign about Obama’s socialism has shouldered more shunning by mainstream opinion makers than the anarchist defecating on a police car while marching to shut down the port of Oakland. Breitbart’s attitude was to tell the right to stop apologizing and to stun the left and put them on their heels.

He wasn’t just a bomb thrower for the conservative movement. His work and the Drudge Report and his own news websites made his work a source of news content for the right. Republicans and Democrats would use Drudge and Breitbart for breaking news and yes, they swore by (and at) it too…

He will be missed by those of us on the right and yes, by those on the left. He is survived by his wife Susannah and their four children.