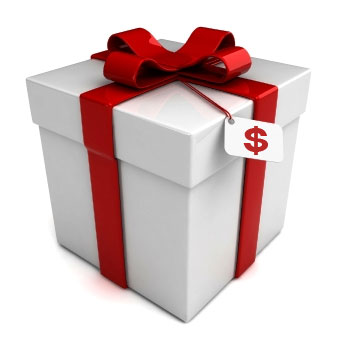 Taxpayers are wrapping up yet another gift to the CBC as the state broadcaster celebrates itself.

And you’re invited! (to pay for it whether you want to or not)

Yes, the CBC’s annual budget has ballooned to $1.1 Billion which included a $60 million top up from our new Conservative majority government.

QMI reports that the information commissioner is at war with the state broadcaster over disclosure of its expenses.  The President of the CBC says that they’ll only respond to a court order.

Cabinet ministers won’t even expense lunch if they don’t need to and when they do, they’re more likely to show how frugal they are like when Monte Solberg expensed a $16 lunch for two with a journalist. Even when ministers abuse their expenses, like Bev Oda’s Juno junket, it’s right there for taxpayers to read in black and white online. However, when we grumble about when cabinet ministers get a driver, or fly first class, similar expenses and perks enjoyed by the CBC brass are a state secret.

Yet, our politicians are accountable; we elect them.

If they receive our tax dollars, CBC and any other crown corp should be accountable for every dime.  We don’t elect their boards of directors but we should at least know how they’re spending our money

The National Citizens Coalition is calling upon the government to implement transparency legislation for crown corps including the CBC. Any organization that receives such a beautifully wrapped gift forcefully given by the taxpayer must be transparent to the same.

Last night, I was on Brian Lilley’s Byline on Sun News talking about CBC’s birthday bash.  The hard newsing, straight talking plucky upstart spends in a year what CBC spends in a week. But Sun money is private, the CBC’s money belongs to us.

So, this year the CBC celebrates.  It’s the most lavish office party you’ve ever be told to chip in for.

We celebrated the occasion at Sun News. Our party cost less than $14.