Around 300-500 protesters in support of the Tamil Tigers descended upon Ottawa yesterday and disrupted traffic for about 8 hours on Wellington street and Queen street.

Though declared a terrorist organization by the Canadian government, members of the Tamil diaspora in Canada showed up by the busload in support of the LTTE and marched between the British High Commission on Elgin street past the Prime Minister’s Office to Parliament Hill. I am told that the Prime Minister could not make meetings on the Hill yesterday because of the protest.

Here, courtesy of Jeff Davis at Embassy Magazine are supporters of the LTTE camped out in front of the Prime Minister’s door. 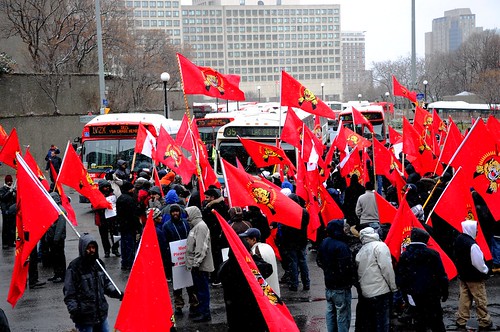 I found this article from the Mackenzie Institute to be good for background reading on the LTTE, the Canadian diaspora and the group’s claim of genocide. Here are a few excerpts.

1983-1987: Classic Guerrilla Warfare: LTTE attacks provoked violent communal rioting by Sinhalese, hundreds of Tamils were killed and tens of thousands displaced inside Sri Lanka. LTTE guerrillas began to engage in conventional warfare with the Sri Lankan Army. The Tigers encouraged refugee emigration into Western Europe, Australia and Canada while using political fronts to tap them for support in their new countries. The Tigers began to destroy rival Tamil militant organizations and absorb other factions.

Genocide, as we have all too often seen, requires much more extensive and enthusiastic massacres than a week of violent rioting 26 years ago. It requires wholesale ethnic cleansing – which is something the Tigers have repeatedly attempted, but not so the Sri Lankan authorities. It requires labour camps and death camps – something that the Sri Lankans have never built. Notwithstanding the events of 1983, Colombo and other Sri Lankan cities have large populations of Tamils who haven’t felt the need to live in fear and apprehension of their neighbours for the past quarter century.

The charges of genocide from the LTTE and their supporters have no merit, and should be immediately ignored whenever they are raised.

Al Qaeda: Besides providing training (presumably on a commercial basis) to a number of member organizations within al Qaeda; the LTTE has assisted members of al Qaeda with false passports and in joint arms purchases before the 9/11 attacks.

Over the decades, the LTTE has frequently pioneered terrorist techniques that have been copied by other groups. These include the suicide belt bomb famously used in the 1991 assassination of Rajiv Gandhi and later to such effect during the Second Intifada by the Palestinians, the use of chlorine tanks in vehicle bombings to generate a gas cloud, later much copied by al Qaeda in Iraq,and suicide speed boat attacks such as were later seen in the attack on the USS Cole. This has led to widespread speculation that the LTTE provides training and instruction for other terrorist groups.

Among the Diaspora, the only organizations that were permitted to exist were at best strictly neutral and non-partisan. However, most were pro-Tiger. Tamils who had left Sri Lanka found that every Tamil cultural body, temple, newspaper, or language and immigration service that they might resort to was pro-Tiger. Being known to hold Anti-Tiger views was to risk ostracism (a severe threat to a new immigrant) or a beating. Trying to avoid paying ‘War Taxes’ meant running the same risks; and could result in penalties to family members still living in Tiger-controlled areas back in Sri Lanka.

Frequently, if the Tiger controlled front organizations needed to make a point, mass attendance at a protest march might be compelled. In recent years, Tamil store owners have been ordered to shut their shops to maximize attendance; and the men used to collect War Taxes might also go door to door in Tamil neighbourhoods ordering people to appear at events. However, as the Diaspora community matured and disappointment with the failure of the 2002 ceasefire grew, a growing number of Tamils started avoiding Tiger events. Legal prohibitions and orders against the LTTE and its front organizations in a number of countries have also encouraged many Tamils to defy these groups.

Click here to read the full article. It’s worth the time.