Much ink has been spilled on the “fossil of the day” award which was given to Conservative environment minister Rona Ambrose at this year’s U.N. Framework Convention on Climate Change (UNFCCC).

Activists complain that the Canadian government deserved the dubious distinction for its inaction on addressing greenhouse gases.

Let me make a graph too! 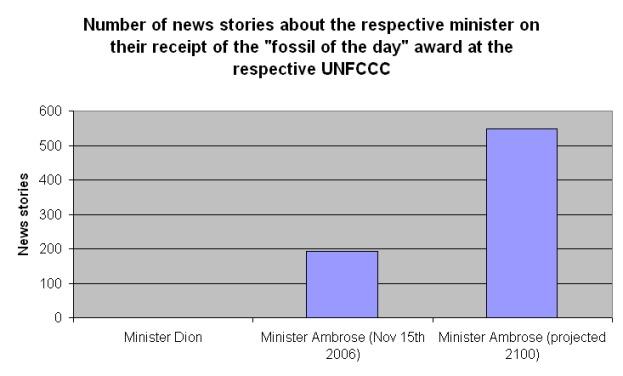 Both ministers of the environment “earned” the award. Why is the media only interested in the one that slags the Conservatives? Consider too that Dion won the award (in 2004) during the last federal election (a time when the smallest political news becomes a amplified for consumption by the electorate). Remember too that Paul Martin’s campaign plane was less environmentally friendly than Stephen Harper’s.

Dion claimed victory over a 30% increase in greenhouse gas emissions since 1990 and banged that gavel (gavel banging must be Dion’s favourite talking point). Now Dion makes the virtually the same 2050 GHG reduction projection as the Conservative government’s Clean Air Act.

Why is it that after 13 years of inaction on the environment, after producing the lion’s share of a 30% increase in GHGs since 1990, and after failing to act on reducing environmental pollutants do the Liberals get a pass in the media?

This while Ambrose receives the same dubious distinction for the Liberal record. This while the Conservatives propose a real plan for reduction of environmental pollutants (and the same pie-in-the-sky 2050 GHG reduction projections as Dion).

The media should look at the facts surrounding the Conservative and Liberal records on environmental issues and not rely on their preconceived biases.

Aside: This prejudiced bias on behalf of the media occurs on many other issues too: such as sexism. Peter MacKay gets two weeks in the MSM’s doghouse while sexist comments about Rona Ambrose are left to stand. She may have nice hair but it’s irrelevant to her worth as a Minister of the Crown. Not to mention calling Deb Gray “a slab of bacon”. For shame…

UPDATE: The link to the environmental activist website above contains an anecdotal account of the 2005 climate conference and seems to be in conflict with other information. While the “fossil of the day” awards website is still not fully-functional and does not currently list previous winners of the awards, reader Nbob has pointed me to another website which contains the proceedings of the Climate Action Network, the activist group that hands out the “awards”. According to Climate Action Network press releases from the Montreal UNFCCC of 2005, Canada did not receive a “fossil of the day” award that year.

However, digging deeper, Liberal environmental Minister Dion did receive a “fossil of the day” award from the UNFCCC in Buenos Aires in 2004. (News stories written about this by the Canadian MSM: 0).

Also, Liberal environmental Minister David Anderson received three “fossil of the day” awards at the UNFCCC in New Dehli in October 2002. (News stories written about this by the Canadian MSM: 0)

Canada also received two “fossil of the day” awards at the UNFCCC in Marrakech in 2001. (News stories written about this by the Canadian MSM: 4)

Those are the numbers for the Climate Change conferences from 2001-2006. Four MSM news articles for six “fossil of the day” awards given to Liberal governments. This is compared to the 193 articles written up about the Conservative government receiving two of these awards!

My deep news search application only goes back to Jan 1, 2001. However, proceedings of the 2000 conference detail that Canada won the “fossil of the day” award more times than any other nation at the UNFCCC in The Hague.

Here’s a new graph showing the “fossil of the day” awards won by each minister, and the number of MSM news stories that results from those wins (since and including UNFCCC in 2001). 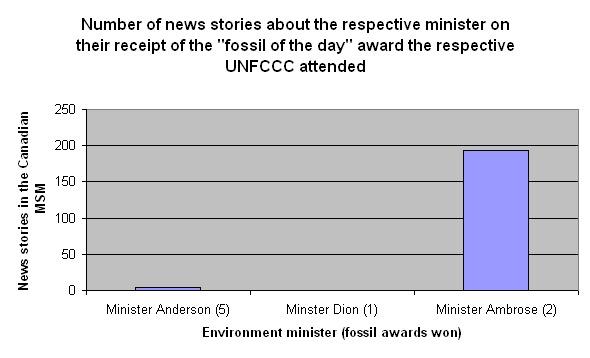 Now, when you hear that the Liberals try and claim that they’re champions of the environment and when you hear that the Conservative plan is a bunch of hot air, please consider this data not provided in those 193 news stories. Ambrose was not the first Canadian environment minister to win the “fossil of the day” award. But, reading the MSM, you’d be led to believe that she was. The Liberals have a trophy case full of “fossil of the day” awards. Is this an example of media bias?