The British home secretary has raised the terror threat level to “critical” following a extensive operation conducted by MI5 and the anti-terrorist branch of the Metropolitan police in the UK.

According to British officials, flights from the UK to the US are to be targeted in a coordinated fashion by terrorists. Terrorists intended to detonate explosives in mid-air.

The Department for Homeland Security in the US has raised the threat level to “red” for arriving flights from the UK. The terror level has never reached red since the implementation of the terror alert system.

The Department of Homeland Security is taking immediate steps to increase security measures in the aviation sector in coordination with heightened security precautions in the United Kingdom. Over the last few hours, British authorities have arrested a significant number of extremists engaged in a substantial plot to destroy multiple passenger aircraft flying from the United Kingdom to the United States. Currently, there is no indication, however, of plotting within the United States. We believe that these arrests have significantly disrupted the threat, but we cannot be sure that the threat has been entirely eliminated or the plot completely thwarted.

UPDATE: The hubs of the attacks were to be Heathrow airport, Birmingham and Manchester. Heathrow is the busiest international airport in the world (about 186,000 per day, 1.3 million passengers per week). Severe delays are to be expected.

UPDATE: The plot is/was to be carried out using handheld luggage. Some details: Electronic keyrings are banned. No mobile phones. No handbags. All liquids banned (except medicine that is essential). Milk/formula for babies is allowed but must be tasted by the passenger.

Statement from the British Department of Transport:
Following this morning’s police action, security at all UK airports has been increased and additional security measures have been put in place for all flights.

With immediate effect, the following arrangements apply to all passengers starting their journey at a UK airport and to those transferring between flights at a UK airport.

All cabin baggage must be processed as hold baggage and carried in the hold of passenger aircraft departing UK airports.

Passengers may take through the airport security search point, in a single (ideally transparent) plastic carrier bag, only the following items. Nothing may be carried in pockets:

All passengers must be hand searched, and their footwear and all the items they are carrying must be x-ray screened.

Pushchairs and walking aids must be x-ray screened, and only airport-provided wheelchairs may pass through the screening point.

In addition to the above, all passengers boarding flights to the USA and all the items they are carrying, including those acquired after the central screening point, must be subjected to secondary search at the boarding gate. Any liquids discovered must be removed from the passenger.

There are no changes to current hold baggage security measures.

UPDATE: News reports are discussing the sucessful diffusion of the plot. Then why is the level “critical”? Why does this imply that an attack is “imminent”? DHS level still not updated (during NYC subway and rail, “sub”-level updated to Orange). DHS presser expected at… 8am EST?! BAA presser to be at 4am EST. Scotland Yard briefing at 4:30am EST.

UPDATE: Heathrow now closed to all incoming flights (unless already in the air)

UPDATE: Canadian content: Newsworld playing “The Nature of Things”. Now CBC is using the BBC feed. Then, at 6am CBC Newsworld starts its own coverage.

UPDATE: US Terror alert level is orange nationally, it is red for flights from the UK to the US.

UPDATE: FNC reports that UK authorities are seeking up to 50 additional suspects.

UPDATE: Just called media relations at GTAA. CANADIAN INFORMATION FOR TRAVELERS DEPARTING TORONTO… no liquids or gels in carry-ons (toothpaste, shampoos etc.) No drinks can be carried through security or on board planes. Passengers are advised to arrive early for extra screening.

UPDATE: Airport screening procedures to face strict review. First it was shoes off. Will we never take coffee/soda on planes again because of liquid-based chemical explosives?

UPDATE: MI5/CIA/MET investigation said to have been ongoing for the past 9 months to one year. 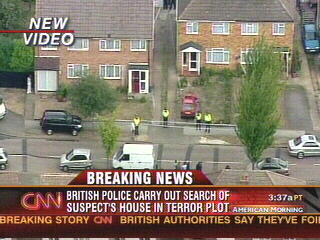 UPDATE: AP reports that targeted airplanes were to arrive in New York, Washington and California.

UPDATE: Chertoff: Plot was well planned and well financed. Calls plot al-Qaeda -like. Plotters were in the final stages of executing their plan. “It was a well-advanced plan”. Chertoff statement:

… Currently, there is no indication, however, of plotting within the United States. We believe that these arrests have significantly disrupted the threat, but we cannot be sure that the threat has been entirely eliminated or the plot completely thwarted.

To defend further against any remaining threat from this plot, we will also raise the threat level to High, or Orange, for all commercial aviation operating in or destined for the United States. Consistent with these higher threat levels, the Transportation Security Administration is coordinating with federal partners, airport authorities and commercial airlines on expanding the intensity of existing security requirements. …

According to the South Korean authorities, the Boeing 707 (registered HL7406) took off from Abu Dhabi and was flying to Bangkok on the way to Seoul. Two passengers who departed from the plane at Abu Dhabi left a radio containing 350 grams of C-4 and liquor bottle containing cca 0.7 l of PLX explosives in an overhead rack on the airplane. The bomb exploded while the plane was over the Andaman Sea near Thailand. Radar contact was lost at the time of the explosion.

PLX is a 95% mix of nitromethane and 5% ethylenediamine. Both are colourless. The former has a fruity smell and the latter has an ammonia-like odour.

UPDATE: British Airlines is also reported to have been targeted (along with United, American and Continental as mentioned above)

UPDATE: US President Bush was briefed by Blair during last visit of the British leader to States.

UPDATE: Confirmed, targets were 9 US bound flights from the UK.

UPDATE: Explosives would have consisted of different chemicals that become explosive once mixed together.

UPDATE: Oil prices to go down because of less air travel?

UPDATE: Intelligence analysts speculate that suspects are not homegrown locals inspired by jihadis. Plot was sophisticated and well financed.

UPDATE: Price of oil is going down because of predicted cancellation of flights, decrease in consumer confidence. Airlines also trading lower.

UPDATE: Information from the Government of Canada for Canadians traveling by air:

The Hon. Stockwell Day, Minister of Public Safety and the Hon. Lawrence Cannon, Minister of Transport, Infrastructure and Communities, today announced increased security at all Canadian airports following a major counter-terrorism operation in the United Kingdom. Individuals in the UK were allegedly intent on committing acts of terrorism using explosives on flights destined to North America.

“We have been in contact with the United States Homeland Security Secretary, Michael Chertoff, and UK Home Office Secretary, John Reid, to discuss the heightened security measures that are being put in place”, said Minister Day. “Our officials are working closely with officials in the UK, the US, and other allies to protect the safety and security of Canadians. We commend the UK on disrupting this significant terrorist threat.”

“In light of these events in the UK, the Government of Canada has implemented aviation security measures to help ensure the ongoing security of the travelling public” said Minister Cannon.

The following security measures are in place until further notice:

Liquids or gels in containers of any size include: all beverages, shampoo, suntan lotion, creams, toothpaste, hair gel, and other items of similar consistency.

Passengers may bring aboard baby formula, breast milk, or juice if a baby or small child is travelling. Prescription medicine with a name that matches the passenger’s ticket, insulin and essential other non-prescription medicines are allowed.

Passengers should pack liquids or gels in checked baggage.

The Government of Canada advises all air travellers to keep these measures in mind when preparing for a flight, and to contact their carrier regarding any possible delays.

The Government Operations Centre is coordinating the response of federal departments and agencies, and will be communicating with provinces and territories throughout the day as needed.

Canadians traveling in the UK, North America and Europe can expect some delay related to increased security measures in all airports.

The Government of Canada remains committed to taking all measures necessary to protect the safety and security of Canadians.