This evening, Prime Minister Stephen Harper gave a speech to the Canada-UK Chamber of Commerce at the Jumeirah Carlton Hotel in London, England.

Here’s some of the speech:

Much of what Canada is today we can trace to our origins as a colony of the British Empire. Now I know it’s unfashionable to refer to colonialism in anything other than negative terms. And certainly, no part of the world is unscarred by the excesses of empires. But in the Canadian context, the actions of the British Empire were largely benign and occasionally brilliant. The magnanimous provisions of the Quebec Act of 1774 ensured the survival of the French language and culture in Canada – to the everlasting benefit of our country. And the treaties negotiated with the Aboriginal inhabitants of our country, while far from perfect, were some of the fairest and most generous of the period. This genius for governance shown by the mother country at the time no doubt explains in part why Canada’s path to independence was so long, patient and peaceful. And it explains why your Queen is still our Queen, and why our “bond of comradeship” remains as sturdy today as it was in Mr. Churchill’s time.

That bond, ladies and gentlemen, was forged in bad times as well as good. Sometimes in the flames of war. When Britain has bled, Canada has bled. A generation of our young men share eternity with British Tommies in the fields of France. Another generation of Britons and Canadians fought side by side against Nazi fascism. Yet another helped our American cousins prevail over the menace of Soviet communism. And ever since that brief, illusory moment when we thought we were witness to “the end of history,” we have been allied in a new global conflict.

This is a conflict without borders. A conflict fought abroad and at home. A conflict in which the aggressor stands for nothing yet seeks to impose its will.

Through the destruction of terrorism. Through the slaughter of the innocent. And through the perversion of a faith.

So once more we face, as Churchill put it, “gangs of bandits who seek to darken the light of the world.” And once more we must appeal to our values, marshal our resources and steadfastly apply our will to defeat them.

Nicely put. This sure stirs pride in the good that our country stands for.

One of my friends traveling with the Prime Minister this week sent me a picture of Mr. Harper arriving at the Jumeirah Carlton Hotel tonight to give the speech. 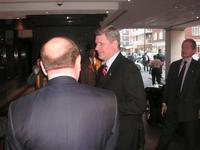 Stephen Harper arrives in London to address the Canada-UK Chamber of Commerce. Click to enlarge