Google, the leading online search provider in the world, has released a new service called Google Trends. The service summarizes all Google searches by region and over time and plots the rising and falling trends.

This service will likely prove useful to many different organizations from music groups who might plan a special concert to the region with the greatest number of fans per capita (searching for them online) to political parties who’d like to track the buzz surrounding various issues in different regions and even that which surrounds themselves.

Armed conflict is always a hot topic among pretty much anyone, let alone Canadians that search Google. According to the search engine there are three particular armed conflicts that have Canadians looking for more information: Afghanistan, Darfur and Iraq. The Canadian military is currently involved in Afghanistan and recently the opposition parties have been trying to press the Conservative government to send troops to Darfur. The Conservative party has promised to come up with a plan for the troubled region with the international community and will likely promise action as long as it doesn’t come at the expense of our other international commitments (namely Afghanistan).

On first glance, it appears that the Sudanese region of Darfur is within the mindset of a greater number of Canadians than Afghanistan.

However, on closer inspection, it appears that Darfur is really only being researched in Ottawa rather than by the rest of the country. Certainly others in Canada are interested in Darfur, however, in reference to Canadians that search for information on Afghanistan; those that search for Darfur are in Ottawa.

Further, this data’s range only extends to approximately April 21st and opposition pressure on Darfur has only been significant in the past couple of weeks. 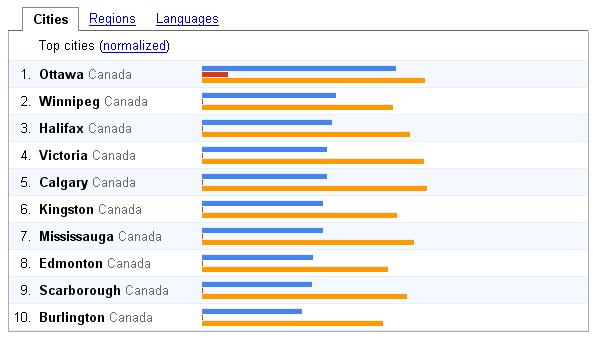 Same-sex marriage was a particularly contentious issue that peaked when the Liberal government extended the definition of marriage to include same-sex couples in 2005. During the previous election campaign, Stephen Harper was wise to inoculate the sensitive and extended campaign by putting the issue on the table during the first day and to do it on his own terms. After the campaign, the Conservatives said that a vote to determine if same-sex marriage should be re-opened would come ‘sooner rather than later’ in the new Parliament. According to historical Google search data, the issue is currently at an all-time low on the minds of Canadian (or at least those that use Google) and it is currently trending downwards. Would it be wise for the Conservative government to keep the issue off of the minds of Canadians while they present their case for a majority government?

Here are a couple of interesting media comparisons:

Surprisingly, the economically beleaguered Toronto Star leads in Google searches among Canadians while the Globe and Mail (which proclaims itself as Canada’s National Newspaper) trails the Star with the National Post in 3rd place. Perhaps the Globe and the Post should do more to reach out towards an online audience, however, online readership doesn’t necessarily translate into actual market share or profitability. This very issue will determine the new winners and losers of the news industry as the business model shifts.

Concerning television, it appears that CTV has less market share (at least among Googlers) than I thought, while CBC takes the top spot among the Canadian mindset with Global appearing to challenge until at least 2006. Then again, “global” means a lot more to Canadians than just TV and “Canwest” hardly registers on the graph because it hasn’t been properly branded as a television product (in my humble opinion). “Global” perhaps is too generic while “Canwest” is what’s on David Asper’s business card, not what’s on the minds of Canadians.

From the Aspers, to the Desmarais and all the Liberal kingmakers in between (that’s it, isn’t it?), let’s take a closer look at the Liberal leadership race.

Google Trends only accepts five comparisons at one time, so I will compare the top five according to Google: Bob Rae, Michael Ignatieff, Ken Dryden, Scott Brison, and Gerard Kennedy. 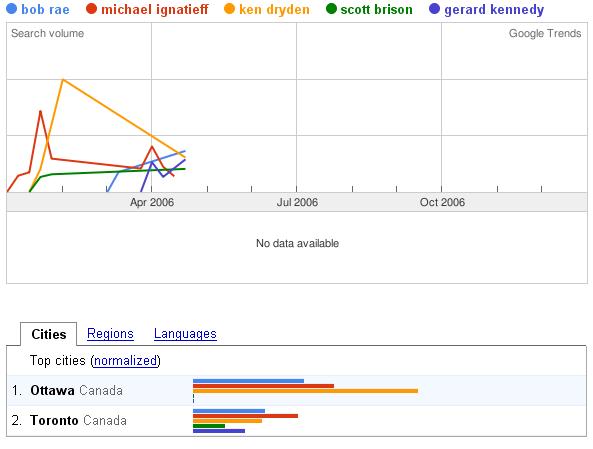 As we can see from the graph, the race is certainly too early to call but there are a couple of interesting trends that we can discern from the graph. First, it appears that Michael Ignatieff may have burned out a lot of his ‘look at me, I’m important’ fuel a little too early on in the election. However, the data that is shown does not include Ignatieff’s launch on April 26th. Therefore, the data is quite incomplete. I am also particularly surprised by the amount of searches Ken Dryden has received so far in 2006. His name is certainly his best asset and it will be interesting to see if he can generate enough excitement (tip: don’t talk) to get enough delegates. A Dryden campaign should be based heavily on others promoting and speaking for Dryden. Scott Brison’s buzz appears as an insignificant plateau and therefore this Kyoto-hating Liberal enviromental critic needs to generate more buzz about his leadership campaign. Finally, from this data, we see that Rae and Kennedy are the only two that are increasing in their Google market share.

I’ve included the cities breakdown because it represents an interesting problem for the Liberals as well. The only two cities that Google finds as significant in regards to the Liberal leadership race are Ottawa and Toronto.

Finally, to get everybody arguing, here’s Google opinion on where the most hockey fans are (normalized per capita over the years 2004, 2005 and 2006). 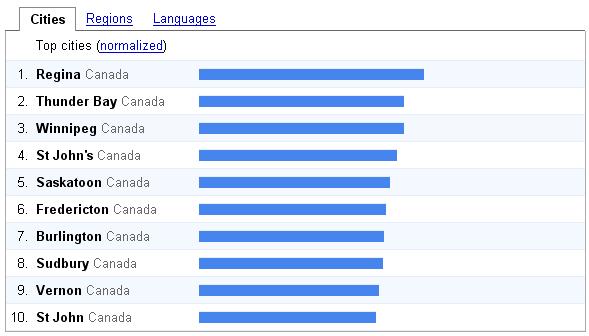