What was yesterday’s/today’s top Canadian news story? Of course, it was the repatriation of four fallen Canadian soldiers at CFB Trenton. The event was sombre and private, however, the media did have limited access in order to adequately bring the story to Canadians while being respectful to families and other mourners. Closeup filming of grieving family members was prevented.

The limited access however has the Toronto Star remixing the story of the day into a story about themselves and they shamelessly splash their dyspepsia onto the front page. 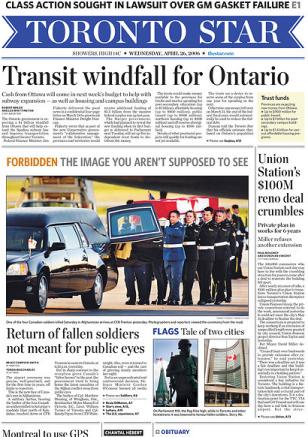 Above the photo, the headline teases and complains: FORBIDDEN THE IMAGE YOU AREN’T SUPPOSED TO SEE

The headline of the story reads: “Return of fallen soldiers not meant for public eyes.”

To the Toronto Star, the story wasn’t the sad return of soldiers to Canada, the story was instead the media’s limited access to the mourning soldiers and families. That other war (separate from the Canadian military) that involves the PMO and the press is purely inside baseball and it seems that the bitter attitude on behalf of the MSM has spilled over onto something that is supposed to be apolitical.

The Edmonton Sun reveals some truth into the deceit of the Star in its caption from its front page photo: “The last of four caskets of Canadian soldiers killed in Afghanistan is unloaded at CFB Trenton in Ontario. In keeping with a new policy the media were kept at a respectful distance but were still able to photograph the sombre moment.” 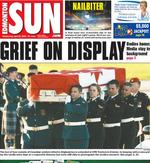 The Edmonton Sun notes that while their access was limited, it did allow them to cover the event respectfully for Canadians. The Toronto Star provides a similar yet more distant photograph and claims it to be some kind of clandestine and illicit photo smuggled out from past the Tory iron curtain. We learn from the Sun that this is a fabrication.

I understand that there is a dispute between the Conservative government and the press over access to the government, however, the attitude taken by the Toronto Star today to focus the lens upon themselves instead of the news, (especially the news yesterday) is shameful. If I wanted to read a journalism trade journal on government relations I’d buy one. The Toronto Star however bills itself as a national newspaper and that’s what I thought I was getting when I picked it up this morning.