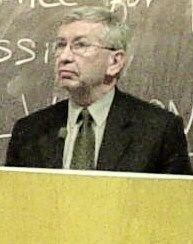 Justice Marshall Rothstein must feel like a student that’s studied his whole life for this final exam. Except this exam isn’t one of those university finals worth 75%-100%, it’s more akin to one taken in high school worth 5%-10%. The Justice is already top of his class and barring some cataclysmic event, he’s already passed.

Enter Joe Comartin, the predicted spoiler of the whole affair. Comartin calls the process “a sham”, because, the reason he gives, is that it does not go far enough.

It really isn’t anything about accountability because obviously we as a committee have no control over this. We’re not even going to make a recommendation, as far as I know. — Joe Comartin, NDP MP

However, we all know that the NDP doesn’t even want to make a recommendation. In fact, they have already decried the entire process dismissing it as “American style”.

Yet, Mr. Comartin has tabled a motion planned to restrict the transparency of the process and may boycott the committee if it isn’t passed. Ladies and gentlemen, that’s what we call “American style filibustering” and being in relative opposition instead of principled opposition.

Indeed, Jack Layton spoke about making Parliament work for the “working Canadians” so one would predict that adding even an ounce (sorry, 28.3 grams) of transparency would be inline with the average working Joe Canadian instead of the legal elitism that Jack now seems to back. Before Stephen Harper, the SCC appointment process was restricted from “working Canadians” and was limited to the Prime Minister and a handful of legal advisors that met behind closed doors. Many people wouldn’t have pegged Layton as an elitist, but perhaps that’s the Toronto NDP in him coming out.

UPDATE: Paul from BBS writes a letter to the editor regarding Joe Comartin’s regressive attitude.