Here’s a picture from Don Newman’s Politics show. On every morning’s broaaadcast Newman featured three spinners from each of the federalist parties.

Can you spot the Liberal? 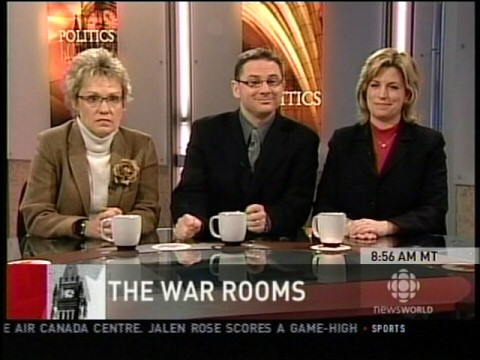 While you’d expect that I have nothing but adoring praise for the CPC spinners during the election (Tim’s Chicken Little moment and his baiting of John Duffy’s reiteration of the beer and popcorn comment were great moments. Sandra’s also been fantastic on Politics day in, day out.), I must also give credit to the NDP spinners especially Jamey Heath and Brad Lavigne. These two certainly delivered Jack’s message better than the mustachioed one ever did.

The Liberal spin team was so disasterous during this campaign that it literally made headlines (Scott Reid’s beer and popcorn remark, the Duffy vs. Duffy moment, and Susan’s “BS” moment were low points during the Liberal campaign).