Liberal incumbent Maria Minna quickly shot back at Beaches-East NDP challenger Marilyn Churley when Ms. Churley questioned her omission of Paul Martin’s name on her election signs on Mike Duffy Live a couple of days ago. Ms. Minna asserted that old stock signs were in rotation in the riding and that no conclusions should be drawn from what might have otherwise appeared to be a snub from the left-of-centre Chretienite Liberal.

The exchange is reminiscent of the 2004 election when the word “Liberal” was dropped from campaign signs to play to what Grits believed to be their strength in the face of Liberal scandal: their new leader Paul Martin. Thus, the campaign signs proudly displayed “Team Martin” and Chretien Liberals scowled at the Martin faction.

However, in the current election, evidence suggests that even some staunch Martin friends are turning away from their leader as pollsters are discovering that Paul Martin is now a hindrance to Liberal fortunes.

Consider Liberal candidate Bob Speller who was Paul Martin’s Minister of Agriculture before he was upset by Conservative candidate Diane Finley. According to the May 4 2005 edition of the Hamilton Spectator, Paul Martin had personally appealed for the former agriculture minister to run again in the riding of Haldimand-Norfolk.

Speller later agreed to take on the task and in the June 20th 2005 edition of the Simcoe Reformer, the local Liberal EDA president boasted “He was a cabinet minister and will be again”.

Speller, however, has released his own “blueprint” for the riding, deviating from the national campaign’s literature and has designed his own signs which, by local reports, have replaced the standard Liberal signs as the campaign has progressed. 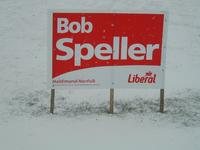 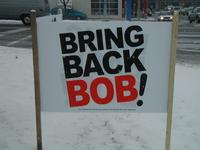 If an ally of Paul Martin originally passed on the “Paul Martin Liberals” sign and if he is now ditching the classic Liberal sign to run on his own style in order to increase his electoral chances, this could be another example of the implosion of Mr. Martin’s campaign.