Liberal Party senior official Mike Klander made a huge mistake with arguably racist and certainly rude remarks that he made in public on his blog. If you didn’t think that blogs would have an effect on the election, witness the following abhorrent remarks by Klander. 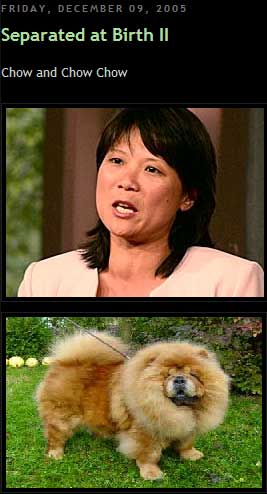 This disgusting artwork (h/t: Wells) is courtesy of Mr. Klander who describes himself from his website as a

Mike continues his autobiography in the third person:

As Executive Director of the Liberal Party of Canada (Ontario) Mike was responsible for managing the day to day affairs of the Federal Liberal Party in Ontario. In that capacity he served as Ontario Campaign Director during the 2000 Federal Election Campaign. In his eight years with the organization he held several other positions including Field Organizer, and Director of Field Operations.

Chow’s husband, NDP leader Jack Layton is also not immune from Klander’s freshman foulmouth as he describes him as “an asshole”. Paul Martin’s close friend only provides the following as justification for his assessment of Layton:

Jack Layton is an asshole… for no reason other than it makes me feel good to say it…and because he is.

Klander not only slams his NDP opponents slams members of his own team including Michael Ignatieff and Dalton McGuinty as he compares the two to Anthony Perkins.

The Executive Vice-President of the Liberal Party of Canada (Ontario) also uses sexual orientation as a derogatory insult when describing politicians (Stephen Harper and John Manley) in cowboy hats. (Klander contrasts “tough and rugged” with “gay”)

On why the Executive Director of the Liberal Party of Canada (Ontario) would never run for office, Klander explains:

I say NO…not because I don’t think it’s noble profession or because I think the commitment is too great…and NO not even because you have to be nice to really stupid people.

I say NO because at any moment, at any place, in any pose or any situation, your picture can be taken and broadcast to the world…if you don’t think that’s a good enough reason, than look at this roster of winners.

Yes indeed, politics does make for strange bedfellows…but is there more to it?

I would bet that his wife couldn’t make his eyes roll back into his head like that.

Again, Klander uses homosexuality as an insult and this is both derogatory to gay people and to Mr. Harper and Mr. Duceppe.

After losing the pseudo-confidence vote back in May, Klander complained about missing members and why they were absent:

Okay, if Irvin Cotler wasn’t at a funeral, John Efford didn’t have a medical procedure in St. John’s and Chuck Cadman would have better scheduled his chemotherapy there MIGHT have been tie

Klander continues his disgusting assault when he focused upon Conservative MP Steven Fletcher in a May 3rd post titled “Furious Fletcher and the Stiff”:

Quadriplegic Conservative MP invites health minister to “take this outside”

I don’t know how I missed this earlier in April.

This is funny so stop pretending that its not…stop being so politically correct will you? Even funnier than the headline is the Yahoo/Canada Press link itself: it appears that story is internally referred to as “Furious Fletcher”

After Paul Martin’s emergency address to the nation, Paul Martin’s leadership organizer in Ontario offers this preview of Liberal strategy and we learn that it was all manipulation:

He looked sincere, he looked prime ministerial and his apology seemed genuine. The promise to call an election within 30 days of the realease of Gomery’s report was brilliant. Why? Not because it will stop the Conservatives from defeating the goverment (because I don’t think it will) but because it gives the Liberals ammunition during a campaign. They will have credibility when they say that this election is unecesarry and that the Conservatives brought us to the polls because of pure political ambition. They know that Canadians don’t want to go the polls and they know that Canadians will think that Martin’s request to hold off on an election is reasonable. In the end, if the Conservatives defeat the government now, it will only reinforce what Canadians already think of them and all political parties for that matter – they are all the same…they will do anything to get elected and they are all crooked.

This was less of a plea and more of a strategy. In the end if Harper actually does hold off then the public will have 7 more months of Gomery…just enough time to get bored of it and more time to move on to important issues.

Remember, many observers speculated that this was the case. However, as a senior Liberal party executive and as a close confidant of Paul Martin, this does much more to confirm Martin’s duplicity.

All of these remarks by Mike Klander are offensive and disgusting to all Canadians and what is scary is that they were made by a senior Liberal official with the closest of ties to Paul Martin.

The Liberals are riding the largest corruption scandal in Canadian history and now we learn that there is bigotry at the highest levels of the party.

All of this suggests that it is time for the broken Liberal party to spend some time in the wilderness, as other parties have done.

The types of comments written down for public consumption on Mike Klander’s blog are unacceptable and should not go unpunished. Canadians demanded a higher standard of their politicians in the past.

UPDATE: Before Mike Klander took down his blog he posted on December 22nd, apologizing for his offensive comments:

It would appear that more people viewed my blog than the small circle of friends it was intented (sic) for. I apologize if anyone was offended by my comments…they were meant to be in jest. Anyway, I have removed my previous posts…

I’m not sure if an off-hand (and now unaccessible) apology will cut it for Mike. What I find particularly surprising is the lack of professional respect that is usually shared among politicos. One may disagree with the ideology of another, however, crass ad hominem attacks are baseless with respect to debate and they debase politicians (and political staffers) professionally. What results is a blanket condemnation of the entire political class by Canadians.

“We were shocked, disappointed and offended … This has become indicative of the way Liberals are seeing this election. They couldn’t find basis for attack on Ms. Chow’s community record, her activism, so they chose instead to focus on one thing. … He needs to take a good long hard look at some of the postings he made on that website and realize the impact that they had on a variety of different communities.” — Ian Capstick, NDP spokesman

“The Liberal party is coming into this election with a corruption report from a judge. I don’t think it helps itself by running a campaign of personal attack and slur, which is what it has been doing — comparing political opponents to animals … I think this has gotten a bit out of hand. … There is quite a campaign of slur and personal attack going on here and one can only hope that the Liberal Party will get a bit of a public backlash over it” — Stephen Harper in Calgary

“It’s certainly our view as a party that there are lines that should not be crossed and unfortunately this was a tasteless posting and Mike recognizes that and has therefore submitted his resignation … If anyone was offended by it, we certainly apologize as a party — Stephen Heckbert, Liberal Party of Canada

but yet, Heckbert tries to mitigate the damage with some self-contradiction:

Heckbert stressed that Klander’s blog was a personal one, appearing on his own webpage rather than the Liberal website

Klander said that he has also apologized informally to Chow, the wife of NDP leader Jack Layton. She is running a tight race in the Toronto riding of Trinity-Spadina.

but yet NDP spokesman Ian Capstick explains that no apology has been offered.

“He realizes what he has done is offensive … Ms. Chow is looking forward to his direct apology.”

Sun scribe Michael Harris echoes a thought on many minds:

“Imagine for a moment if that picture and those words had been found on the website of [Conservative national campaign co-chair] John Reynolds, for example, or [conservative] Rick Anderson?”

UPDATE: On the lighter side, Angry has a solution for all high level Liberal bloggers.

“The nature of the blog didn’t surprise me because that’s how the Martin guys operate … They put everyone else down to raise themselves up.” — Sheila Copps, former Liberal leadership opponent of Paul Martin

It’s wrong and there’s no room for that kind of behaviour by anyone in the political process … There’s no excuse for it.” — Tony Ianno, Liberal candidate for Trinity-Spadina