When I was in Ottawa at the beginning of last month for the first part of the Gomery report, I had a chance to sit down for a chat with James Moore, the Conservative MP for Port Moody-Westwood-Port Coquitlam in his office on Parliament Hill.

James was the Conservative Party’s transport critic in Stephen Harper’s shadow cabinet until the dissolution of Parliament last Monday. 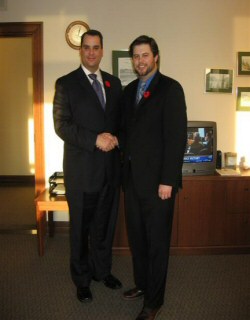 In this podcast, James and I speak about a variety of topics from blogging to methamphetamines to Martin Luther King Jr.

James is currently running for re-election in his BC riding and is keeping a daily campaign blog. British Columbians would certainly benefit from his re-election to the House of Commons. Best of luck James.