I got an email at about 7pm last night from a reader encouraging me to post about an NDP youth poll that I could help swamp by getting the word out especially on the Shotgun blog and through some other conservative blogging friends. After writing a post on the Shotgun, encouraging its conservative audience to participate in the poll and after successfully suggesting to Kate that she should also encourage her readers to do the same, the numbers went wild for Stephen Harper. Free Dominion also contributed heavily to skewing the numbers in the Conservative leader’s favour.

The NDP poll question is:
In your opinion which federal leader has done the best job of standing up for students?

By 12:09am, the following were the results of the poll: 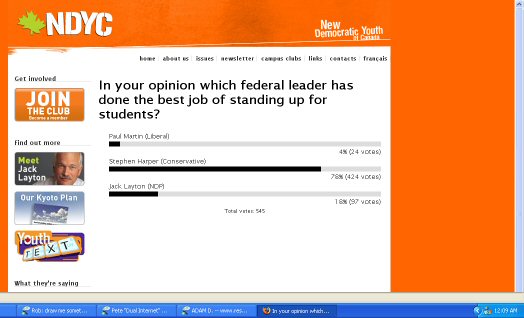 Well, I thought, we’d successfully bombarded the NDP poll with the power of the conservative blogosphere and internet. So, when I got a call from some friends to head out for a pint, I decided that the ball was rolling and the damage for the most part had already been done.

However, when I got back from some late night wings and drinks, the following graced my screen. 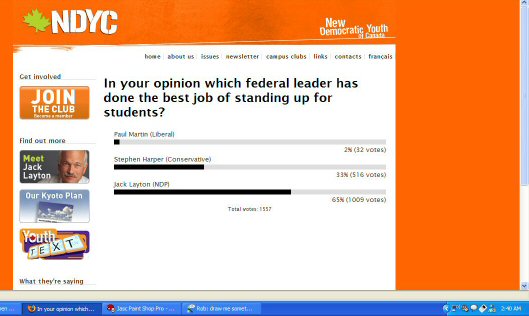 Somebody woke up the NDP webmaster! Those logs must have been crazy too. The poll went live yesterday morning and registered little activity throughout most of the workday until we coordinated our attack just after the dinner hour. During that time, Freedominion, the Shotgun and the busiest blog in Canada (Small Dead Animals) were all referring conservative-minded people to vote. I was laughing by the time I logged off when we had captured 78% of the 545 vote total of the day.

However, between the hours of 12:09am and 2:40am, 8 people voted for Paul Martin, 108 people voted for Stephen Harper and Jack Layton’s vote went up by 912! The vote total had tripled during these short early hours. How could this be?

In a few keystrokes, the NDP Youth webmaster likely added 900 votes to Jack Layton’s total. (He had 97 votes up until 12am)

In fact, FD poster Vek noticed the same at 1:49am.

So, either the NDP blogging power kicked in at 9x that of the conservative blogosphere at about 1:30am, or the numbers were manipulated. Vek’s observation shortens the NDP supposed “surge” (or likely manipulation) to a window of 1h 40min.

This isn’t very honest. I laughed when I imagined the NDP webmaster’s discovery of the poll results but I expected him/her to remove the poll entirely. However, the numbers were most likely manipulated to give Jack Layton a 900 vote boost sometime during the wee hours of the morning (12am-2:30am). A period in which the highest traffic blog in Canada (and the Shotgun, and Conservativelife and Freedominion) only contributed at most 108 votes to Stephen Harper.

Also, isn’t the idea of such a poll on a partisan website a silly idea? An NDP poll on an NDP site asking visitors to choose the most effective federal leader is hardly scientific. Their audience bias is obvious. Nobody would take any stock in Jack Layton winning the poll. Perhaps that’s why it was so funny that we hammered the poll and had Stephen Harper winning (by legitimate votes).

I guess I can’t be too hard on them though. We did the same thing to them on their silly insignificant web poll that they did to Terry Fox during the Greatest Canadian contest. However, when the CBC didn’t like the result, they didn’t suddenly dump a truckload of votes on Pierre Trudeau.

UPDATE: 12 hours after I last took a screenshot, votes are still coming in for Stephen Harper. In fact, Harper is up by 280 votes, Jack Layton is up by 70 votes and Paul Martin is up by 8 votes. Two observations: (a) Layton’s 70 votes seems to be consistant with their actual rate of legitimate voting over twelve hours. During yesterday’s vote, Layton had 97 votes by midnight. (b) Harper’s votes are still streaming in from various Conservative websites even though it has been revealed that voting for Harper in this poll may never allow him to win.