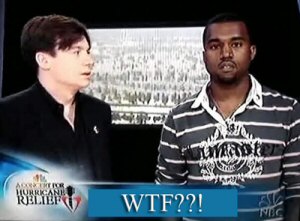 Poor Mike Myers. The man behind Austin Powers looked very much like a deer in the headlights when Kanye West departed from the script during NBC’s telethon for Hurricane Relief. Kanye turned political and accused President George W. Bush of “not caring about black people”. Myers is visually uncomfortable when West goes on his rant and gives a helpless “oh come on now” glance towards the rapper when West finally utters the ridiculous claim.

As Ben Stein noted in the Spectator yesterday:

“George Bush is the least racist President in mind and soul there has ever been and this is shown in his appointments over and over. To say otherwise is scandalously untrue.” — Ben Stein

Kanye’s ridiculous rant obviously lacked any positive effect whatsoever and merely injected vitrole into a humanitarian effort at the expense of the other volunteers who took the time to raise money for the non-partisan Red Cross. Unfortunately, people likely tuned out after being disgusted by West’s comments and ultimately these comments hurt the relief efforts.