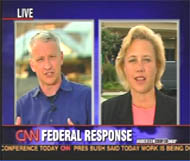 The following is a clip from CNN’s continuous coverage of the relief efforts (or lack thereof) of the American federal government for the victims of Hurricane Katrina. Cooper asks Senator Landrieu if the federal government should bear responsibility for their weak response to the crisis in the Gulf States. Senator Landrieu responds by cheerfully thanking fellow politicians for their efforts like she was giving an Oscar acceptance speech. Cooper cuts her right off, quite angrily and tells her that he hasn’t heard of how wonderful all of the politicians are because for the last four days he’s been busy seeing dead corpses among the chaos in the region.

The clip shows a refreshing rebuke of a politician, whom people look to for leadership during crises, by a journalist tired of dithering and tired of long-winded fluff-words without substance. Politicians are often masters of saying a lot without saying much at all. While this might generally work when talking about deficit spending or fixing healthcare for a generation, when the topic turns to an immediate crisis people have a high sensitivity for BS.

I wish the media would do this more often with politicians in fact. A lot of politicians have pre-rehearsed talking points that are spouted freely while reporters do little more than privately roll their eyes (because they’ve heard the same points a few times before) and think of the next question. I’d love to see more reactive reporting where the reporter might say,

“I’m going to cut you off because I’ve heard this before. Now tell me…”
or
“Listen, we’re just having a conversation here, tell me straight out…”

Anyways, Anderson Cooper provides a great lesson for future and current students of journalism: cut through the spin, get the answer and call politicians on their ignorance when they are ignorant. Politicians should be held accountable (and not just when “there’s a time for that” as Senator Landrieu asserts) and Cooper does this appropriately.