The campaign is coming up and its coming quickly.

Blogging has become the new medium for getting the message out and, more importantly, getting it past the filter.

At the beginning of this year, I co-founded Blogging Tories, a grassroots organization of Conservative Party supporters that do not hesitate to express their opinions, point out media bias, and hold the Liberals and the NDP to account. They do this without compensation and thus their message comes from the strength of their beliefs. Blogging Tories is the case-study of grassroots activism.

In fact, as I have noted before, there seems to be more Canadian conservative-minded bloggers in the ‘blogosphere’ than there are on the left. The conclusion that I have derived is that conservative opinion is stifled by the mainstream media and has not generally been heard. 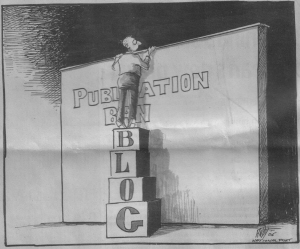 Blogging has given a voice to those without one in traditional media and now these voices are being heard. Most recently, members of the Blogging Tories were instrumental in forcing the lid off of the Jean Brault testimony as Judge Gomery has now realized that publication bans cannot exist in the modern media climate; they cannot exist in the modern media climate that we have defined. Indeed, since this shift in media delivery after the advent of blogs, laws and unjust laws are being redefined concerning personal and press freedoms.

The 2004 Presidential election campaign witnessed the first election in world history which exploited the potential of blogs to the fullest extent. From the automatic organization of neighbourhood parties for Bush to Meetups for Kerry, the blogging phenomenon enabled the American political class to appeal to the grassroots for help in delivering their the message.

Conservatives gather around blogs for warmth in a cold and hostile media environment. From this small hopeful light in the darkness, conservatives spread the message to others open to positive change and re-establishment of our country’s pride. This is the grassroots and this is our time.

If you question the power of blogging in political campaigns, Google “Conservative Party of Canada” and check me out. I’m the 7th result as of the time of this post, and my name is the first person’s name that appears.

And I’m not even running. Maybe I should.