The last day of the convention, Saturday was the most interesting day (at least business wise) of this “most successful gathering of conservatives in 20 years”.

Going on about 3 hours of sleep I arrived at the convention hall after checking out of the downtown Montreal luxury hotel known as the “Econolodge” by most and as “home away from home” by cheating spouses, high school lovers, thrifty travelers and students like myself. A relatively clean place, at a relatively cheap price… and what’dya know… just across the street from the Cool Blue Belinda dance party.

The plenary session was progressing pretty well until the issue of the definition of marriage came up. “We’re going to reinitialize” the Chair said in a dry tone while, in contrast, the room’s attention peaked to the ‘hot button’ issue that was before them. Reinitialization is the process by which delegates must be sitting at the tables in order to be counted incase the vote is so close that it goes to the keypad vote. On the issue of traditional marriage the “yays” beat the “nays” clearly but for some reason they went to the keypad vote. 75% in favour of maintaining the traditional definition, 25% opposed.

On the issue of abortion, another surprising result. 55% of delegates favoured the party not supporting legislation on abortion while 45% want our MPs to support limits on abortion. Perhaps social conservatives are simply more vocal on this issue than the silent majority of conservatives.

A cameraman and a reporter from CPAC rushed over to us (we were standing at the back, instead of sitting at delegate tables) and asked “Can we get your comment on this result on camera?” It didn’t take me any time at all to add up the situation. Speaking on camera about my reaction to a highly polarized issue? “No, I don’t think so” I said. Even Stephen Harper didn’t go on record about abortion until his speech Friday night. I certainly wasn’t going to that day.

The other interesting moment of the plenary was the youth wing debate. The best moment was when the Chair told the crowd that enough points were heard for option A (youth wing) and asked for someone to speak for option C (no youth wing). Tony Clement takes the microphone, (I’ll paraphrase) “I’d like to speak for option C”. I thought this was odd as Clement was the former president of the conservative youth at the University of Toronto. He went on to speak on option C labeling it the wrong option and he then brazenly encouraged the delegates to vote for option A. The ‘Yes for Youth’ crowd went crazy and I chuckled to myself having found new respect for Tony Clement and his sneakiness. The youth wing was voted down by perhaps the smallest margin seen that day.

The plenary session allowed me to meet some more interesting people including Amy Leindecker who marveled at the hawtness (yeah, that’s the ticket) that is liveblogging from the convention floor. She must have been inspired because she now has a blog of her own (check it out). In fact, she took a picture of me and Queen’s CPC club president Bryan Cowell, and sent it to me today. I’m liveblogging and he’s um… live surfing.

Thus, dear reader, I do now present liveblogging from the convention floor: 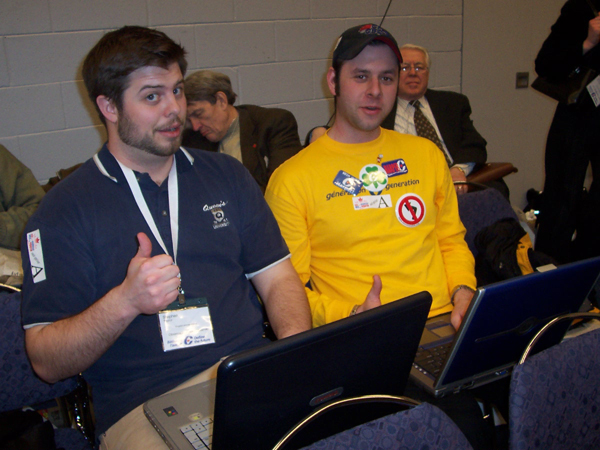 Perhaps next convention, we’ll have special credentials like our American blog brothers (and sisters) who blogged from the GOP and Dem conventions last year.

After the votes I had another chat with Peter Mackay. We found ourselves talking about the Belinda Dance Party(TM) and he told me about a party he was having that evening.

I laughed, “You’re tempting me away from my graduate thesis!”

It wasn’t to be. The Econolodge and I had already parted ways and I was able to score a ride home early anyways.

So, there you have it. The first successful policy convention of the Conservative Party of Canada. T’was a great time!