And it will be because of Jean Chretien’s doing. Read on…

I wrote about the proportion of political contributions by donor type on January 13th to dispel the inaccurate assertion by Conservative naysayers that the CPC takes its money from Bay street and that the NDP and the Liberal parties are true representatives of the Canadian electorate. As you may remember, I uncovered that the Liberals take the bulk of their donations from businesses and commercial organisations while the NDP takes the significant bulk of their donations from trade unions. Meanwhile, the Conservatives took the majority of their contributions from individuals.

At the time, I also compiled the numbers for 2004, the year of the last general election which led to the first minority Canadian parliament in 25 years. The numbers were strikingly different due to Jean Chretien’s political finance reform which limited individual contributions to $1,000 and limited corporate/organization cash to $5,000. 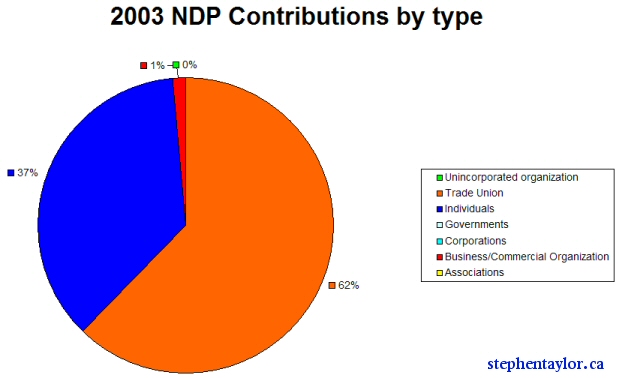 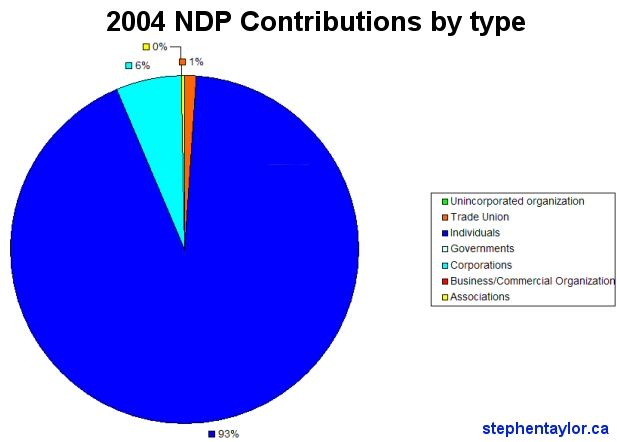 Suddenly, during an election year no less, the largest contributor type to the NDP became individuals instead of trade unions. In fact, even corporate donations surpassed those from trade unions! How could this be?

There are many more corporations and small businesses in Canada than there are trade unions. In fact, singular trade unions draw their political power from the ‘solidarity’ of millions of card carrying members. The largest contributor to the NDP in 2003 was CEP, the Communications, Energy & Paperworkers Union of Canada, which donated $909,775.00. Last year, in 2004, they didn’t even bother. The next largest union contributor of 2003 was the UFCW who donated $775,919.60 to the NDP. Last year, they donated $1,225.00. In fact, the top 10 union contributors (who were also the overall top 10) contributed exactly $4,617,894.22 to the NDP. Last year, union contributions added up to a paltry $15,785.29! Because of the $5,000 cap, the unions were better off telling their members to contribute to NDP individually (which some of them may have, but most probably did not — individual contributions to the NDP, including non-unionized individuals, added up to $1,395,895.41). Also, keep in mind that this $1.3 million represents 93% of the donations received by the NDP last year.

What did Jean Chretien do? He effectively capped the influence of organized labour on political parties in Canada (ie. the NDP) and he did so in a very deliberate and neutering way to that party.

Neutered financially, however not ideologically, the base of the NDP still exists. Yet without means of accomplishing political change, members of that party must now seek an alternative avenue in which to exert its influence. They will (or, as I suggest, they should) buy up Liberal Party membership en masse to have a significant influence in that party. And why not? Anytime that Conservative Party leader Stephen Harper hints that he might defeat the minority government and thus become Prime Minister, Jack Layton huddles next to the Liberals faster than you can say Sponsorship Scandal.

Besides, Jack Layton was either a fool or he was putting on a brave face when he commented that “it’s difficult waking up after election night and finding out that you’re not the Prime Minister”. Assuming the latter, the NDP should soon understand that they are never likely to form a government and realize that their best forum of influence would be directly within the Liberal Party of Canada as members and perhaps as its true ideological base.

The effect of this hostile merger with the Liberals would be beneficial to the left and the right. In the wake of the merger, an ideological vacuum would be created on the centre-right which would then be filled by the Conservative Party; fiscal conservative voters that currently hold their nose and vote Liberal would be driven towards the CPC. Meanwhile, those on the left would finally have a voice beyond that of the foolishly optimistic Jack Layton.

Finally, all Canadians would benefit from the debate from unambiguously left and right viewpoints without the sullying byproduct that comes with the political sidestepping of third parties.