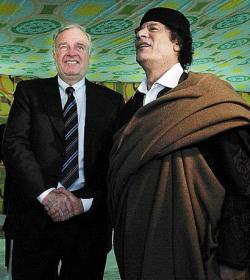 Prime Minister Paul Martin was in Libya yesterday and met with its dictator, Muammar Gaddafi. Martin apparently hit it off with the man known for his role in the bombing of Pan Am Flight 103 over Lockerbie Scotland as the dictator remarked, “On a personal level, we have gained a quite personal friendship. We are friends not just because he is the Prime Minister of Canada but we shall always be friends, even if he is not the Prime Minister”.

Gaddafi even shared his vision for Canada: “Pretty soon I expect Canada to be a jamahiriya (a revolutionary socialist state of the masses led by a military dictatorship)”

Martin was in the Libyan desert for the tent summit to mark the one year anniversary of Libya’s renunciation of its weapons of mass destruction program. While this marks a good first step for the north African nation, Gaddafi still reigns over countless human rights abuses.

While Canada may have economic interests in the area, it is unfortunate that our Prime Minister is visiting with Gaddafi (given the human rights abuses and criminal past) rather than focusing his efforts elsewhere.

“the Prime Minister should have been spending a lot more time getting the basics of our national trade interests right first before spending several days with a known unpredictable and eccentric North African dictator … There is still no political strategy for investing political capital in our critical relationship with the United States, where the border is the Achilles heal of our prosperity. Why has the Prime Minster not toured the United States building the key and diverse political relationships so necessary to fight back the Byrd Amendment and try to prevent future Byrd Amendments at source? We need to retrieve the $4 billion in softwood lumber industry money confiscated in the United States, to open the border faster to the devastated livestock industry, which has lost $5 billion in the BSE crisis” — Belinda Stronach, Conservative Party of Canada

A particularly good question considering that I don’t remember the last time a Canadian Prime Minister has even gone on a ‘trade mission’ to our most significant trading partner, the United States.

The National Post has more details on the visit. Also, check out the Lybian news service’s account of the tent summit, it’s amusing. Quotes like “Paul Martin expressed during the meeting his country’s appreciation of the wisdom, vision and strategic analysis of the Leader and his initiatives and efforts in securing peace and stability in the world. He underlined that all of the Canadian political figures appreciate and respect the Leader’s vision, initiative and efforts at all levels.” (Sarcastic emphasis added by me) show the hallmarks of a military dictator’s grip on the media: narcissistic and editorialized news.