The following image is from the Live webcam overlooking parliament hill at about 5:45pm today. 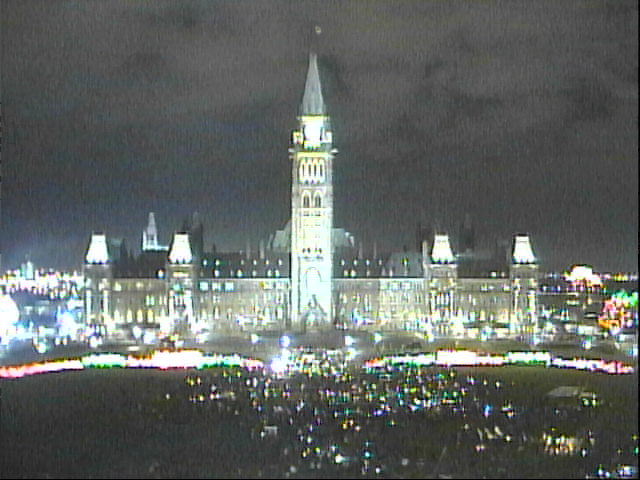 Thousands of Canadians have descended upon the hill at Parliament to protest a man. They have come to protest a man who rose to distinction after a questionable contest which saw weeks and weeks of counts, recounts, after ballot box stuffing and potential voter fraud. The implications of this man on Canada and the world ranks among the concerns of the people gathered in Ottawa today.

Some have called his advocates arrogant, advocates which idolize him and call him fondly by his silly nickname think that his ideas and policies are what’s best for the U.S., Canada and the world, and to disagree would with him might well label you anti-patriotic by his frothing ideologues. This man’s colleagues would have especially deleterous effects on the Canadian economy if we ever allowed them greater influence; trade would slow to a trickle. To top it all off, his closest advocate is a balding man who actually runs the show and has a knack for media manipulation.

I wish that I could be there, to join with my fellow Canadians to protest that recent ballot and a man who rose to the top after all the votes were counted. I would join with them, among their angry chants and we would join as one, for the common good, and exclaim,

I sure didn’t vote for him.