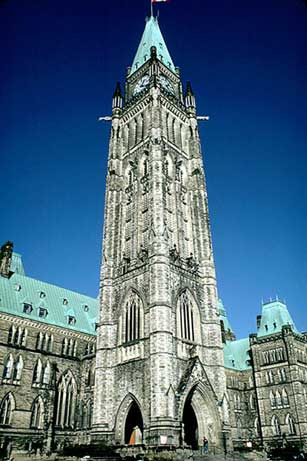 Today, Paul Martin is to give his second speech from the throne in eight months as Parliament resumes this week. The House of Commons will appear and function differently for the leader of the diminished minority government as opposition MPs now surround Liberal Party benches and new rules of order will serve to keep them seated until the appropriate time.

It’s been a quiet summer on the front page (save Martin’s unprepared fiasco of a premiers healthcare ‘summit’), yet the opposition leaders have been working hard independently and in concert to hold the Liberal government accountable and answerable to the Canadian electorate.

Every leader has a plan of how he’d like to see the business of the House unfold, however, stashed closely, each leader also has an alternate playbook of contingencies for many, if not most eventualities.

Stephen Harper will use this Parliamentary session as a ‘getting to know you’ time for Canadians and they will get to know the Conservative Party and its leader as he holds the Liberal government to its election promises. Harper has proven to be solid and effective as the Leader of the Opposition and this will be his time to emerge prime-ministerial if he plays his cards right.

Gilles Duceppe will find himself in an odd situation today if the Conservatives naturally oppose the throne speech (as is somewhat of a tradition in modern Parliamentary sessions). As Chantel Hébert points out, the Liberals and the NDP do not form a majority, and if the government is to start off without losing its footing, the Bloc may be in an odd position of supporting the throne speech. Paul Martin may make the speech easier to swallow for himself and his main Quebec rival if he makes concessions (read: side deals) for that province.

Stuck in the middle of all of this and responsible for inter-party communications to ensure that the House of Cards doesn’t fall before Paul Martin wishes is Liberal House leader Tony Valeri. Valeri, who contested Sheila Copps and retired the controversial longtime Liberal MP from politics, doesn’t even speak the same language as the man who holds the balance of power and perhaps the linchpin of the shaky Martin minority government.

Will Paul Martin see a leadership challenge during this uncertain government? Who, with the Bloc, will attempt to represent Quebec’s interests? Whom will the Liberals turn to key pieces of legislation? Whom will they turn against? Will any MPs be enticed to switch parties? How will the Sponsorship Scandal finally unfold?

Only two things are certain going into this 38th session of Parliament: there must have been some interesting caucus meetings last week… and there is not one member that envies Paul Martin.