This morning, my alarm went off at an ungodly hour so that I could get downtown for breakfast with Conservative house leader (and former leader of the official opposition) John Reynolds. Getting up at the seventh hour of day is a challenge for any student but I told myself that it would be a good way to get on a normal person’s schedule.

John Reynolds was to give a speech at the downtown Holiday Inn to supporters to bolster the campaign of local Conservative candidate Blair MacLean. I was running a little late for the 7:30am start, but no matter, these things never start right on time anyways. 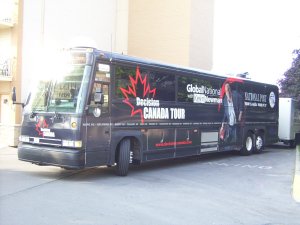 As I walked towards the hotel I was greeted by Global National’s Kevin Newman, or rather the superimposed visage of him plastered on the side of the Global Decision Canada bus. I was surprised that Global would be covering the event.

Or so I thought.

One of the reasons why I dragged myself out of bed so early in the morning was to show support, and to show support one helps fill out a room with others for the media (which always seems to underestimate numbers when it comes to Conservative rallies). 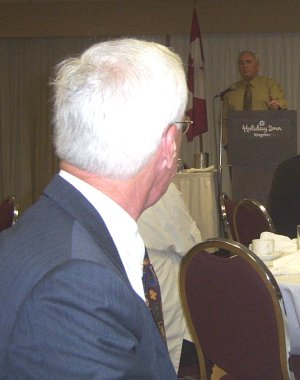 There wasn’t even a reporter in the room. No Kevin Newman, not even someone from our local channel CKWS. The Global people were merely staying at the same hotel. So, while Kevin Newman was waiting for his complimentary “what, no bagels?” continental breakfast, John Reynolds was giving his stump speech to the Conservative gathering in the 6th floor conference room. I really don’t blame Newman; it was 7:30 in the morning.

I spoke with Mr. Reynolds (he was sitting at my table). I’ve been involved with the new Conservative party for a while and I’ve been writing about it for almost as long. Sure, we could have chatted about what might be expected (“how ’bout ’em polls?” and “the Liberals must be really worried about their seats” etc. etc.) but I didn’t want to initiate the expected conversation. I did, however, start with something safe (the upcoming debates and how a good performance by Harper should contrast with Paul Martin’s mumbly joe approach very well). But then I came up with something out of left field.

“Jack Layton should also do well in the debate don’t you think?”

I was surprised by the answer. “Yes, he should do quite well. He’s very good in French and the NDP will do better with French voters than they have in the past. It’s good because this time all of the national leaders are fluent in French.” He went on to say that parties have been dogged by that issue in the past.

Off the cuff to an unexpected question, unrehearsed and genuine.

Sure, there are more relevant questions to pose to a Conservative campaigner and the success of the NDP is hardly a topic that’s burning in my mind, but I didn’t want to hear something that I’ve already read, I wanted to hear his opinion. The conservation that followed was actually interesting instead of expected.

So, it was good that politics didn’t put me to sleep this morning, yet I’m a little short of it and I’ll now need to battle through the workday without passing out sometime after lunch.