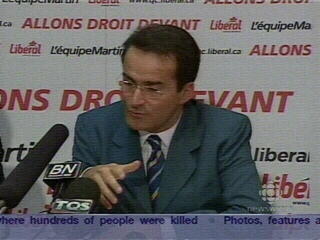 Bloc Québecois co-founder and current Liberal Québec lieutenant Jean Lapierre called a press conference today to tell Quebeckers that a vote for the Bloc would be an indirect vote for Stephen Harper’s Conservative Party of Canada.

Perhaps the reason why Quebeckers don’t want to vote Conservative (or NDP) is because they don’t want to split the anti-Liberal vote.