The Conservative Party of Canada released television ads yesterday. The spots feature a casual-looking Stephen Harper leaning against his desk. Harper mentions that it’s time for accountability in Ottawa and doesn’t mention the sponsorship scandal directly. The ads run will run after the liberal party advertising campaign, which occurred a few weeks ago and featured an adlib Martin talking about how there needs to be accountability in Ottawa. Accountability is a good concept, however, I’ll vote for the party that takes it on as a policy issue and not as an afterthought. 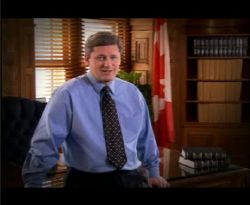 Here are the ads: