In an email to select officials in the Conservative Party obtained indirectly by yours truly, an apparent leak has come from the Liberal war-room in the form of some photocopied documents mailed in a brown envelope.

The Liberal attack “storyboards” criticize Stephen Harper on a variety of issues while suggesting that Jack Layton is abandoning his principles and that Stephen Harper and Gilles Duceppe will form a “government”. 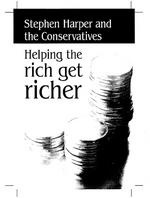 Liberals underestimate the intelligence of Canadians because the GST cut is a 2% cut on everything that is bought in stores. While it is true that a 5% GST would benefit the purchaser of a new Ferrari, the GST is applied to everything that is bought (including clothes, furniture, and Christmas toys). In fact, a consumption tax cut, such as Harper’s proposed GST cut, is the only type of tax cut that benefits the poorest of the poor including those that are below the personal amount on their income tax returns. A regressive tax cut it is not. The Liberals provide two quotes, the first criticizes a GST cut rather than an income tax cut. I’m sure that Stephen Harper’s cuts to income tax (via the childcare and sports benefits) make the Fraser Institute smile and I’m certain that we haven’t seen the last of Stephen Harper’s income tax cut announcements.

Next the Liberals attack Jack Layton, pairing him in a coalition with Stephen Harper and Gilles Duceppe. This storyboard targets soft NDP support and suggests that Jack Layton will compromise his base’s principles for coalition power. “[Duceppe] wants to take Canada apart and [Harper] wants to let him”.

“Jack Layton talked a lot about making Parliament work. But he ran over to the Conservatives and the Bloc the moment he saw a chance to score political points. On November 28th he stood right by Stephen Harper’s side to bring down the government and force a holiday election. Now he has given Harper the chance he’s been seeking to remake Canada with his right wing agenda.”

First of all, how can you criticize Jack Layton for working with the majority of Parliamentarians in denouncing the revelations of massive Liberal corruption? In fact, Jack Layton was acting as a responsible parliamentarian in a minority Parliament by pulling the plug on corruption. This agenda was neither right wing, nor left wing. Jack Layton, Gilles Duceppe, Stephen Harper and their respective caucuses (even a couple of elected Liberals) chose right over wrong and ended the Liberal government. The attack also laughably suggests that Jack Layton would enable policies that he is fundamentally against. This is an attack on Layton’s credibility.

“His other friend, separatist Gilles Duceppe and the Bloc Quebecois are motivated to get their cause back onto centre stage with a new provincial leader in Quebec. Jack Layton, who will win little support in Quebec, has given the separatists the opportunity to resurrect their ambition of leaving Canada.”

Paul, Paul, Paul… this election isn’t a Quebec referendum! And by framing it so, you endanger the unity of our country. The Liberals are giving up on federalist Quebec premier Jean Charest and closing the door on constructive dialogue with Quebeckers. Further, under the Liberal watch, the Bloc is now more powerful than ever before, pumped up by the Sponsorship Scandal. The Bloc’s current popularity is due to Liberal corruption and it is the Liberals that have given the separatists the opportunity to resurrect their ambition of leaving Canada. Stephen Harper the only Prime Ministerial candidate that is standing up for Quebec’s place in a united Canada as he has offered his voice to debate Gilles Duceppe where Martin wouldn’t. 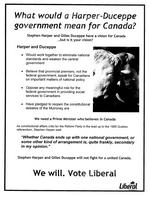 The next storyboard implies that Harper and Duceppe will form a coalition government and rule Canada. First of all, Duceppe and the Bloc are fundamentally against playing any part of any government. They have said that they will only support issues that benefit Quebec. Stephen Harper has also said that he will not form a coalition with any party and will maintain his role as Prime Minister by building consensus with parties (and members) on a case-by-case basis. As for the issues that the attack addresses, it is true that Harper – as a conservative – believes in a smaller federal government and believes that provinces should have more say over matters in which they have the constitutionally mandated jurisdiction (ie. education and healthcare). While it would be false to say that Duceppe believes in this type of ‘redistributed federalism’ as he is certainly not a federalist, Duceppe does believe that Quebec should have more of a voice over its own affairs.

Next, the Liberals take on Mike Harris as a target… again. In the 2004 election, the Liberals took on the former Ontario premier, suggesting a common agenda. As Ontario will likely decide the outcome of the current election, the Liberals are targeting those that disapproved with Mike Harris and those that might be leaning towards Harper. While the Liberals blame Ontario’s fiscal and social woes on the Harris’ common sense revolution, they fail to note that many of Ontario’s problems were caused by the abandonment of the Common Sense Revolution by Eves and then by the election of Dalton McGuinty. Remember Dalton? He lied to Ontario about their taxes by raising them with his health care “premium”.

Finally, the Liberals resort to the old song and dance about Stephen Harper and the Charter of Rights and Freedoms. They provide an old quote and a goofy picture of Stephen Harper. Harper expresses that “serious flaws exist in the Charter of Rights and Freedoms”. The Charter is a Liberal document with one serious flaw in my opinion: it is wrong that rights can be withheld by the use of the notwithstanding clause. This type of “just kidding” clause in a legal document that defines our rights remains a significant failure of Trudeau’s legacy. Stephen Harper has thankfully promised not to use the notwithstanding clause on the same-sex marriage issue. The truth is, Paul Martin wants to attack Stephen Harper on something the Conservative leader has refused to do. Martin does this while he asserts that anyone who doesn’t stand up for the Charter (read: same-sex marriage) is unfit for office. Meanwhile, 40 Liberal candidates are against same-sex marriage as Paul Martin holds a double standard.

Stephen Harper has been providing a positive vision for Canada with daily policy announcements and a plan that looks forwards instead of backwards. This preview of the Liberal strategy to attack Stephen Harper and the Conservative party shows that the Liberals haven’t got a record to run on and that they can only hope to retain power by providing fear to Canadians.

I suspect that the Liberal attacks will only get uglier.

UPDATE: Mike Duffy and Gloria Galloway have confirmed, from the Liberal warroom, that these ads are indeed real. However, the Liberals are dropping the Stephen Harper “rich get richer” ad and the Layton attack ad.